We moved all your accounts and transactions from Pay My Loan and Transfer Money into Online Access on December 4 and 5. Learn More
If you received a security alert email from us on Saturday or Sunday, click here.

Foundation’s Charity Golf Classic Raises $150,000 for Veterans and Their Families 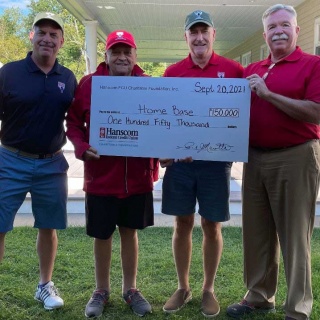 Hanscom AFB, MA (September 27, 2021) – Hanscom Federal Credit Union Charitable Foundation held its 7th Annual Alan M. Hart Memorial Charity Golf Classic at Red Tail Golf Club in Devens, MA, on September 20, 2021. The Classic was headlined by Allied Solutions and Fiserv, and raised $150,000 as part of the Foundation’s $750,000 commitment to support Home Base over five years. Home Base is a Red Sox Foundation and Massachusetts General Hospital Program dedicated to healing the invisible wounds of war for veterans, service members, and their families through world-class clinical care, wellness, education, and research.

Over 100 golfers traveled to Red Tail Golf Course in the historic military community of Devens, MA. The scramble-style tournament included an annual silent auction, longest drive and hole-in-one contests, and breakfast and lunch at the clubhouse overlooking the 18th green. Another returning fan-favorite event of the tournament is a liquor-putting contest featuring beverage prizes sponsored by August A. Busch and Co., Armed Forces Financial Network, and Smokey Quartz Distillery.

Keynote speaker and retired Brigadier General Jack Hammond, executive director of Home Base, spoke of the work they do for veterans. “We provide all the care at no cost: we house them, feed them, et cetera. We just want them to say ‘yes’ and then we’ve got the rest from there.”

This year in particular has been challenging for veterans coming to Home Base for treatment. Hammond explained that even those veterans who were doing well after the program have struggled in recent weeks. “Watching Afghanistan fall the way it did, the human suffering that took place, and questioning some of the impact of their sacrifices has reopened a lot of injuries for folks who had already received care.” He closed his remarks with, “I just want to let you know that the care you help fund matters, it makes a difference, and it saves lives, so thank you.”

Named after longtime director of Hanscom FCU, founding chairman of the Foundation, and avid golfer Alan M. Hart, the Classic aims to honor both his memory and his commitment to community service. Paul Marotta, chairman of Hanscom FCU Charitable Foundation, Inc. and chairman emeritus of Hanscom Federal Credit Union, said, “It’s wonderful to see so many people join us in supporting Home Base’s life changing mission yet again. Our foundation is proud to provide critical funding so they can continue their mission of healing the invisible wounds of war for so many of our service members and their families.”