Second Hero of the Summer is a Love Story 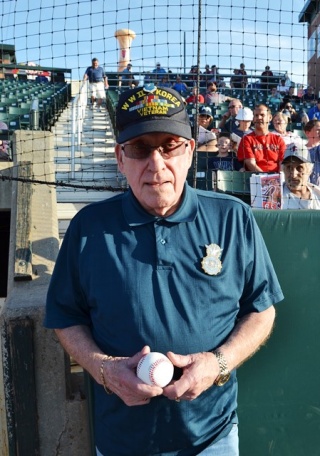 Yes, love was the theme at Hanscom FCU's second Hero Among Us night at the Lowell Spinners game on July 12. Ken Hopkins, the honoree, and his wife Barbara, celebrated their 67th wedding anniversary that evening. “Through it all, she has been by his side,” observed their daughter Karen Powers.

At nearly 87, Mr. Hopkins is one of our country’s few remaining WWII veterans. He also fought in Korea and Vietnam. “My dad was military police and I know he saw many horrific things during war time. He loves his country and feels it was an honor to defend her,” Ms. Powers wrote in her nomination form.

Despite being 100% disabled due to his time in the military, Mr. Hopkins continues to walk in parades and speak at ceremonies to honor fellow veterans. “I've watched my dad stand at attention and salute the flag as it goes by,” Ms. Powers noted. “To him it is a great honor.”

Ms. Powers expressed her admiration for her dad. “I know he has received different medals and honors. Whenever I am out in public with him, he beams with pride when people comment on his veteran’s hat and thank him for his service. He says he wouldn't change a thing.”

The crowd cheered as Mr. Hopkins threw out the first pitch. Players and spectators alike thanked Mr. Hopkins for his service. There was cake, decorations, and many photos with kids, grandkids and great grandkids.

"Mr. and Mrs. Hopkins are a reminder that our heroes have the same needs and desires as everyone else," observed Paul Marotta, Hanscom FCU Chairman of the Board. "They have families, friends, coworkers, and communities that care about them. What makes them special is their willingness to put those people, indeed all of us, ahead of their personal safety and comfort."